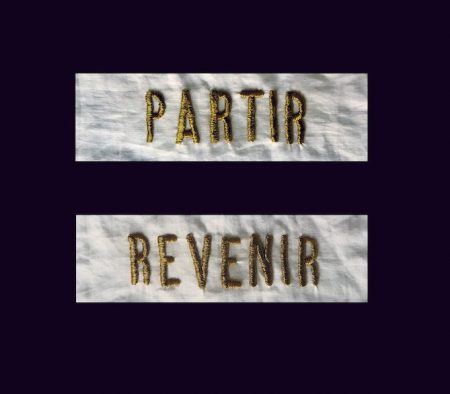 ”Partir/Revenir” is an exhibition and an encounter between three artists that emerged from an idea of art as an expression of movements and displacements, of leaving and returning. The urge to move arises both out of necessity and as a desire to experience another kind of encounter; another way of thinking, another cultural context or perhaps even another language.

The geographical distance between the artists can be traced with a line beginning in Sweden in the north through France and ending in Morocco in the south. It cuts through linguistic, political and cultural borders and traditions. At the center of the artist’s lives, however, there is something in common. They share, each in their own way, the daily routine of artistic practice.

The works created by Christine, Katarina and Safaa first conceived of in the insular sphere of their respective studios are now presented together in a space that is divided between the dark, the bright and the open. In the exhibition there is a subtle dialogue between different forms of expression and different techniques and gestures that may not be clear or even perceptible but exists nonetheless. The artists have traveled and visited each other and communicated in different languages. It is in their daily lives that their paths may cross rather thant in a wider, geographical context.

The people with whom we connect or the social milieu that we create is partly controlled by our motivations and partly by external factors outside of our control. The connection between the far north and the south for instance, will not forge itself, we have to establish it through our own efforts. ”Partir/Revenir” seeks to bypass the obstacles and boundaries that arise as a result of the differences in the languages, histories and political conditions that keep us apart. Through art we can enter a space where this is possible.